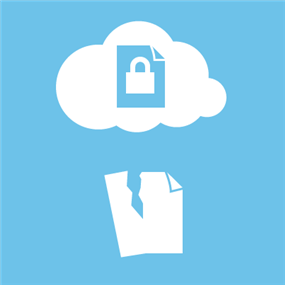 A file in the cloud cannot burn, be stolen, accidentally left behind in a restroom, or any other number of things that could affect a hard copy of important information. For a recent example, take a look at the Internet Archive, whose scanning facility in San Francisco caught fire. Although no data was stored in their San Francisco office, if it had been, cloud redundancies would have prevented any loss. 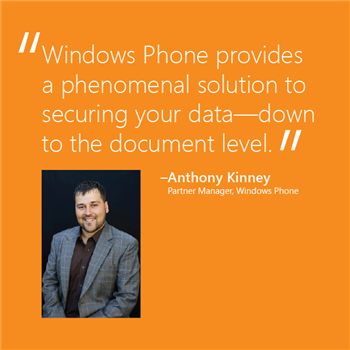 Mobile devices are the mighty double-edged swords of today’s workplace. On the one hand, they provide greater integration of information, on the other, they could be your business’s one-way ticket to a catastrophic security breach. This week we had the amazing opportunity to speak with Anthony Kinney, Microsoft’s Verizon Partner Manager, about mobile security and the ways to mitigate data risk in a BYOD environment.

According to Kinney, the three main security risk areas associated with BYOD are:

We asked Kinney what Microsoft is doing to make sure that moving to a pocket office doesn’t mean introducing security risk. He discussed how our multilayered approach to security makes adopting a BYOD policy far less of a risk, with solutions like Secure boot technology, remote “wipe” capabilities, and automatic cloud storage (among other security solutions).
What makes the greatest difference, however, are the actions a company takes to ensure that their data is secure. The way Kinney sees it, employees jailbreaking and rooting devices is one of the largest risk factors for companies who allow employees to BYOD. What those companies do is implement third-party services to “containerize the data,” so it never actually goes onto the local device.
According to Kinney, Windows Phone solves for this by protecting the data at the data center level before it even gets to the device. This means each document can have specific edit/view/share settings so that when it’s accessed on a mobile device it can’t be ‘saved as’ or forwarded to another cloud service, depending on what the settings permit. This way the phone fully understands the corporate policies on the document, helping IT to provide security—even at the file level.
This level of device integration with your data allows your company to consider a BYOD or CYOD policy without the need for third-party security solutions—which themselves offer another point of potential failure and risk. By working with your existing desktop OS, email, and other systems, the native Windows Phone OS helps mitigate data loss risk for your pocket office by preventing it in the first place.

If your Auto insurance company sees you as a deadbeat or high-risk or driver, it might cancel or non-renew your policy.

However, a company can non-renew your insurance at the end of each policy period (six to 12 months) or cancel the policy during the first 30 to 60 days that it’s in force. The main reason for midterm cancellation is nonpayment. State regulators set the requirements, such as a written notice of non-payment, together with a 10 to 30-day grace period to pay.

Some states allow insurers to cancel coverage, usually for an activity – such as a DUI conviction that involves bodily injury or substantial damage – which indicates you’re at high risk for an accident; or for misrepresenting your driving history (for example, not disclosing that your teenager was behind the wheel instead of you when an accident occurred). Some companies will backdate coverage to the cancellation date, while others will not cover you during the period when you haven’t paid your premiums.

If you can’t bring your account up to date or the company cancels you for a reason other than non-payment, your policy probably won’t be renewed – which means you’ll have to look for insurance elsewhere, probably at a higher rate. Depending on the reason for cancellation, some companies might refuse to write your business. In this case, you can to turn to the state’s assigned-risk pool, which offers bare bones coverage at higher rates.

Your best move is to do everything possible to avoid cancellation or non-renewal. For example, if you can’t afford to premium payments, consider reducing your coverage rather than take the risk or cancellation.

For more information, just give us a call. We’re here to help!

Saying ‘I DO’ To Wedding Insurance

As the average cost of getting hitched keeps rising (to $27,000 in 2012), more and more couples are using Wedding Insurance to protect their investment against mishap – and help ensure peace of mind on this special day.

Wedding policies will reimburse you for losses due to:

You can also buy coverage “riders” for a variety of other risks, ranging from a military service call-up to the bride or groom and damage to a wedding gown or tuxedo, to stolen or damaged gifts, and cancellation of your honeymoon due to illness, bad weather, or other mishap. If you’re holding the ceremony in your home, you might also want Liability insurance in case a guest gets hurt or injures someone.

We’d be happy to tailor a Wedding policy to meet your needs, and budget. Just give us a call.

If you want to insure a mansion or a priceless art collection, don’t be surprised if a certified thermographer shows up at your door, infrared camera in hand.

Thermal imaging cameras are among the latest high-tech tools Homeowners insurers are using to help stem losses before they become catastrophes, saving policyholders from heartbreak and companies millions in damage claims.

One major insurance company is using thermal imaging cameras for its high-value homes, letting inspectors “see” hidden hot or cool spots. A hot reading might indicate a fire hazard from an electrical malfunction, while a cool reading could come from a leak. In one case, the camera detected a cool spot in a ceiling due to a leak caused by a faulty 37-cent clip in an upstairs ice maker. If the ceiling had collapsed, it would have caused $125,000 in damage.

High-tech devices aren’t limited to the high-end market. One insurer offers an online risk-assessment tool that its Homeowners clients can use to find the risks for flooding, wildfire and storm surge, based on their address. This company also provides its clients inexpensive alarms that can detect potential water leaks before they can cause extensive, and expensive, damage.

Insurance companies are exploring new technologies. One insurer has patented a data recorder that can be installed in building to analyze potential causes of damage or destruction. Another company has filed a patent for a system that would use spectroscopy to identify chemical changes caused by wildfires and other natural disasters. If such a change were detected and confirmed, the company could speed up the claims process.

Metal car keys are going the way of the land line, as most drivers have graduated to a key fob or remote with a transponder that needs programming before use. If you own a high-tech luxury vehicle you might have a “smart key” – a remote control to plug into your dashboard or leave in your pocket.

Although these devices add convenience, they’re pricey. You’ll pay $200 to $400 to replace a smart key on a luxury car, plus $100 an hour for labor. If you lose all your keys, you might need to replace the locks, which could cost $1,000.

Auto insurance will cover the cost of replacing smart keys (or metal keys) only if the loss comes from a peril covered under the policy. For example, if your keys are damaged when you collide with another car, Collision coverage would pay to replace them. Comprehensive coverage –which reimburses you for loss or damage to your vehicle from theft, vandalism, fire, hail, or flood – would include replacement of the keys, as part of the vehicle.

If your car keys are stolen, Homeowners insurance should pay to replace them because theft is a “named peril” under the policy.

Bear in mind that your Auto or Homeowners deductible will apply against the cost of replacement.

Technology is well on the way to eliminating car keys. According to the AAA, smart phone apps that allow you to unlock and start your car are standard on many vehicles as of 2015.

In the meantime, you can avoid paying the high cost of replacing smart keys by keeping spares in a safe place.

To learn more, please feel free to get in touch with us.