California’s Drought: A Shocking Photo And Other Updates 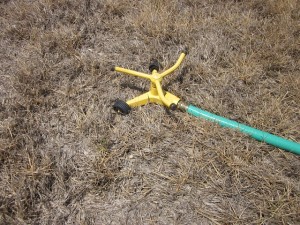 Farmers in California, where Gov. Jerry Brown declared a state of emergency last month, are facing hard choices as a drought threatens to ruin their crops. They must weigh the costs of paying for irrigation against the chance that their fields will never get enough water this season.

A striking picture illustrates the severity of the situation, as Northern California’s Folsom Lake, a reservoir northeast of Sacramento, is seen in January at only 17 percent of its capacity. In July 2011, “the lake was at 97 percent of total capacity and 130 percent of its historical average for that date,” according to NASA.

The federal agency says it is working with the California Department of Water Resources to help the state manage its water resources. Last month, NASA released other images showing the drought’s severity. As NPR member station KQED reported, the state’s snowpack is shown in January 2013 and last month. Much of it did not return.

Here are other updates on the situation:

NASA said today that it’s working to share satellite and weather data with California farmers and water officials to help them avoid wasting water, and to use it in the most efficient way possible. The space agency says a trial run of its Satellite Irrigation Management Support system in 2012 and 2013 “demonstrated sustained yields while reducing the amount of water used by up to 33 percent relative to standard practice.”

Growers of almonds — a state crop valued at $5 billion in 2012 — have been pulling trees out of the ground while they’re still in their prime, in desperate actions driven by high water costs. The AP spoke to a grower who watched crews rip 20 percent of his orchard out of the ground. A man who does that work for a living says business is up 75 percent because of the drought, and his crews are working from sunup to sundown.

Forecasts of rain and snow were welcomed by many Californians, as parts of the state could see more rain this week than they’ve had in the previous eight months together. But Time’s Bryan Walsh warns that even with that rainfall, “much of California will still be below average for precipitation this month. Since February tends to be the wettest month for California, that means that the state still has a larger and larger rainfall deficit to make up if this drought is to ever end.”

Contact Scurich Insurance Services today to get a review of your agriculture insurance.