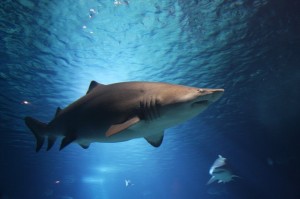 A sharknado is not a specifically named peril on a standard homeowners insurance policy. But would your insurer pay up anyway if, as in the instant cult classic Syfy TV movie, a giant tornado blew in from the ocean and dumped thousands of man-eating sharks on your neighborhood?

Or, to put it a bit more bluntly, if–in spite of being blown out of its habitat and short of breath–a great white aimed its massive jaws at your left bicep and tore it off, would you get reimbursed?

We asked folks at the Insurance Information Institute, an industry group, for their take on the issue. The considered opinion of several experts, including their chief economist, was yes–for the most part.

“A tornado is a wind event,” says Mike Barry, vice president of media relations. Wind events, including hurricanes, tornadoes, cyclones and other such calamities, are covered under a standard policy. But a falling shark?

“It would be covered, yes, as a falling object,” Barry confirms. In case you were wondering, damage from an errant asteroid would be covered by your homeowners insurance under the same principle.

As for the arm that got munched by that ferocious flying fish, you’d have to file a claim under your health insurance policy. If, however, you owned the shark and it bit someone else, you would be covered by liability insurance through your homeowners policy. From an insurance perspective, it’s not so different from a bite by a really big, finned dog.

What to do afterward
Of course, in the aftermath of a sharknado, there would be so much more to consider. You wouldn’t want all that shark meat go to waste, so you’d need to check out Consumer Reports Ratings of chainsaws and kitchen knives, not to mention freezers. And what better way to celebrate your survival than with a magnificent slab of marinated mako cooked on one of our top-rated grills, accompanied by a cold glass of a best-in-class craft beer?