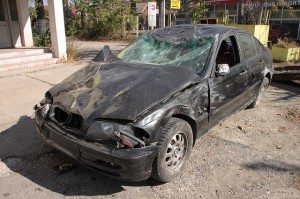 A benefit of the Affordable Care Act may be a drop in car insurance premiums as health care providers shoulder more of the treatment costs tied to accidents and injuries, according to a new report from a leading think tank.

The nonprofit Rand Corporation says the rise in the number of people with medical coverage under the ACA, also known as Obamacare, could result in a “modest” drop in claims against auto insurers. In turn, the cost savings could be passed to consumers as insurance companies and state regulators evaluate and refine coverage rates, according to Rand’s report, “How Will the Affordable Care Act Affect Liability Insurance Costs?”

“The Affordable Care Act is unlikely to dramatically affect liability costs, but it may influence small and moderate changes in costs over the next several years,” says David Auerbach, a Rand policy researcher and the study’s lead author. “For example, auto insurers may spend less for treating injuries, while it may cost a bit more to provide physicians with medical malpractice coverage.”

Besides auto insurance rates, expenses tied to homeowners insurance, workers’ compensation and general business liability insurance may also fall once the ACA further takes hold. But on the downside, expenses for malpractice coverage could rise, according to the report.

Obamacare to trim insurance costs by up to 5 percent?

“Researchers say the changes could be as much as 5 percent of costs (for auto, home and the other forms of liability insurance) in some states, but caution there is considerable uncertainty surrounding such estimates,” the study notes.

Auerbach and Rand point out that liability insurers currently reimburse tens of billions of dollars each year for medical care related to car crashes and workplace injuries, among other claims. “For example, auto insurers collectively paid $35 billion for medical costs associated with accidents in 2007, about 2 percent of all U.S. health care costs in that year,” according to Rand.

The reason for a possible jump in malpractice claims faced by doctors and health providers is simple: Rand says that more claims could be filed as more people get medical coverage.

The malpractice figures are already significant. The study points out:

The study was sponsored by Swiss Re, which stresses the powerful effects the ACA may ultimately have on the insurance industry and elsewhere. “Businesses and policymakers need to understand how and why their risk profiles might change as the Affordable Care Act is implemented,” Jayne Plunkett, Swiss Re’s head of casualty reinsurance, said in a statement.

A surge in medical insurance enrollments

In a separate survey, Rand estimated “a net gain of 9.3 million in the number of American adults with health insurance coverage from September 2013 to mid-March 2014.” While noting that any survey has a margin of error, Rand added that its findings didn’t include those who signed up for coverage in late March and early April. That enrollment surge could “dramatically affect” the total figures, Rand said.

Rand estimated that Americans without insurance fell to 15.8 percent, from 20.5 percent.

Of those who secured new medical coverage between September and March, 8.2 million didn’t buy it on the ACA’s federal or state-run exchanges, but through an employer. Rand says the increase was likely because of a drop in unemployment, which opened the door for many to be eligible for workplace plans, and ACA incentives encouraging employees to get coverage.

Rand added that 3.9 million secured health insurance through the exchanges, 36 percent of them previously uninsured. That number was expected to rise as the March and April numbers came in.

In declaring the ACA an unfolding success, the Obama administration recently said that more than 7 million people signed up for coverage through the marketplace exchanges.
Content provided by: http://www.moneytalksnews.com/2014/04/21/obamacare-may-reduce-auto-insurance-rates/#Kqdfh4ZHhsjylE1J.99