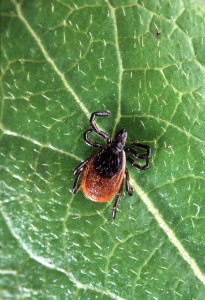 It’s summertime, which means outdoor play, hiking, gardening — and tick bites. The creepy crawlies tend to latch on during the summer months and these arachnids are ubiquitous throughout the U.S.

But tick bites are more than just an annoying spring and summer nuisance. Each year, about 300,000 people in the U.S. catch Lyme disease, which is caused by bacteria, from a tick bite, the Centers for Disease Control and Prevention estimates. Thousands more develop tick-borne diseases such as the malarialike disease babesiosis, the flulike anaplasmosis and the Heartland virus infection.

But people can take steps to avoid the nasty critters, beyond the old-standby advice to cover up and avoid tall grass, experts say. From wood chips to a quick ride in the dryer, here are 10 ways to avoid tick bites.

Insecticides can be used to repel ticks, said Thomas Mather, a public health entomologist at the University of Rhode Island, and the director of tickencounter.org.

Permethrin, the insecticide found in antimalarial bed nets, kills adult ticks as well as those in their larval stage, called nymphs, which are the likeliest to harbor Lyme disease.

“It’s not toxic to the ticks,” Mather told Live Science. “They still can scurry across a DEET-treated surface, and get to places where the DEET is not,” such as a warm human leg, he said.

2. Be vigilant at home

Hiking and camping aren’t the most common ways to catch a tick-borne disease, said Kirby Stafford III, the state entomologist at The Connecticut Agricultural Experiment Station and the author of the “Tick Management Handbook.”

“We estimate three-fourths of people pick up the ticks in activities in and around the home,” with children’s play and gardening being some of the riskiest activities, Stafford told Live Science.

Parents should also make sure to do tick checks on children when they come in, he said.

Tick nymphs have leaky cuticles, or outer covers, that rapidly lose moisture. As a result, they can’t survive in environments with lower than 80 percent humidity for more than eight hours, Mather said.

As a result, nymphs congregate in leaf piles in shady, humid environments, so sticking to sunny areas can reduce tick exposure, he said.

Most ticks around homes stay within a few yards of the interface between the yard and a wooded area, Stafford said.

To keep the yard tick-free, use landscaping that deters mice, deer, woodchucks and other rodents that carry ticks, he said. People should also remove tick habitat such as leaf piles, shrubs and groundcover near the house. Play sets should be kept in the sun, away from the shade, he added.

Ticks won’t cross a barrier of wood chips placed around the yard’s perimeter, perhaps because the dry material makes them dry out too much, he said.