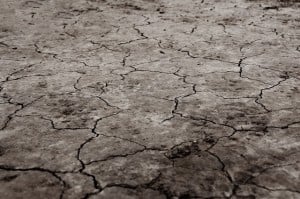 Jose Pineda Rivas could use the cash. He’s got rent to pay, and his tooth hurts so badly he needs to see a dentist.

But these days, money for fieldworkers like Rivas in this drought-parched stretch of California is about as scarce as rain. And the situation is likely to get worse before it gets better.

The 61-year-old farmhand, who lives in a small home with his wife and a friend’s family, is hardly making enough to cover basic expenses, let alone pricey dental work. He thinks he can afford to get his aching tooth removed, he said. But actually replace it?

As he tipped back his straw hat and morosely gazed at his flip phone on a recent day, Rivas explained that the crew boss at a nearby tomato farm was supposed to contact him about returning to work. But the call hadn’t come.

It’s the same desperate story all over the Central Valley.

Like many fieldworkers in Mendota, a rural community 35 miles west of Fresno dubbed the Cantaloupe Center of the World, Rivas finds his seasonal job of more than two decades at risk of disappearing because of the statewide drought.

Fields that normally come to life by April with the planting of tomatoes and melons have been left barren due to insufficient water. And that means less farm work to go around.

“Usually this time of year, we’ll all be going out and weeding and laying irrigation line,” Rivas said in Spanish. “None of that work has happened, and who knows when it will?”

A near-record dry winter has put California in the grip of its worst drought in decades. While many parts of the state have yet to feel any real impact – no cutbacks, no stiff rationing – that’s not the case in the farm towns of the San Joaquin Valley, where water is the touchstone of the economy and underpins the region’s standing as the most agriculturally productive in the nation.

About 20,000 farm jobs statewide stand to be lost this year out of 400,000, the bulk of them in the valley, said Jeffrey Michael, director of the Business Forecasting Center at the University of the Pacific in Stockton.

The estimate does not include thousands of additional jobs supporting agriculture: the truck drivers, packers and processors, as well as the merchants, real estate agents and teachers serving these farm communities.

“We know that this year unemployment is going to be significantly worse than it’s been in a long time,” said Michael, whose job loss projections are based on the amount of farmland likely to be fallowed.

The lost work, he added, will only compound hardship that bedevils many valley towns where unemployment rates consistently rank among the highest in the state.

In Mendota, where about half of the 11,000 residents are in families living below the federal poverty line, the jobless rate stood at 37 percent as of the last count in March, according to state data.

The mayor of Mendota suggested that unemployment could hit 50 percent by summer as the effects of the drought fully play out – a level higher than what was seen during the recent recession.