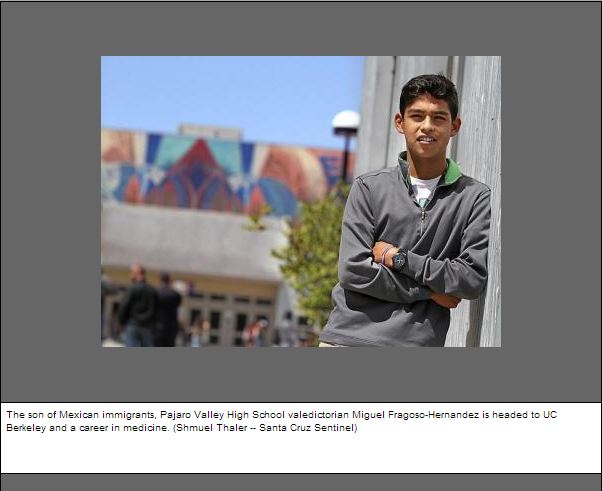 WATSONVILLE >> At Pajaro Valley High School, Miguel Angel Fragoso-Hernandez is known as Nino, or Kid, a nickname bestowed during his freshman year, when, a year younger than most students after skipping first grade, he was the smallest player on the junior varsity soccer team.

But Fragoso-Hernandez, now a 17-year-old graduating senior and class valedictorian, has another title in mind: doctor. He’ll take a step toward achieving his career goal when he enrolls at UC Berkeley in the fall to study biology or biochemistry.

At a graduation ceremony Thursday, he plans to remind his classmates how they reached this point in their lives.

“It’s not like you did it on your own. Your teachers helped you. Your parents helped you all through your life,” Fragoso-Hernandez said. “At the same time, (the graduates) sit here because they worked for it.”

Fragoso-Hernandez will speak from experience. His parents, Martin Fragoso and Julia Hernandez, emigrated from Santiago Tulantepec in Hidalgo, Mexico, to the U.S. in their teens. They were very poor, Fragoso-Hernandez said. His father scrounged from garbage cans to get enough to eat. His mother, living on a rural ranch, watched two siblings die in childhood.

Here, they worked in the fields at first, but later Miguel’s father became an auto mechanic and eventually bought the business from his boss. After volunteering at Freedom Elementary School, his mother was hired to supervise students at recess.

As the family’s income improved, they were able to move from a series of crowded garages into a three-bedroom apartment in a Holohan Road complex. Though he was only 7 at the time, Fragoso-Hernandez recalls his amazement at the space and the fact that the apartment had its own kitchen.

Growing up, he watched his father work two jobs at times, and his mother devote herself to work and raising three sons. But he didn’t understand what they were trying to accomplish until high school.

Though neither Fragoso nor Hernandez went to school past the sixth grade, they knew education was the key to reaching that goal, and they instilled that value in their children.

Fragoso-Hernandez said math and science captured his interest at any early age. He paid attention as his older brother did his homework, and by the end of kindergarten he had mastered multiplication. He finishes high school with a 4.24 grade point average. In addition, he was a forward on the varsity soccer team for three years, and has worked as a math tutor in an after-school program for elementary students since he was 14.

His father’s struggles with poor health led him to decide on a medical career, either as a general practitioner or a surgeon.

When Fragoso-Hernandez was in middle school, the family moved to Gilroy, but he and his two brothers, Eric, a sophomore at Cal State Monterey Bay, and Marco, a seventh-grader at Lakeview Middle School, elected to commute each day so they could remain in Watsonville schools.

The three brothers were born in Watsonville, and Fragoso-Hernandez considers the city home. Once he earns his medical degree, he plans to return.

“Without Watsonville, I wouldn’t be where I am today,” he said. “I want to give back to this community.”