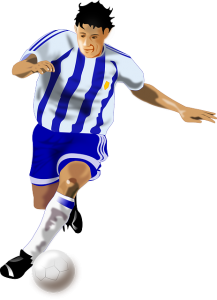 Watsonville >> Yoni Hernandez dashed around the Pajaro Middle School field at the center of a pack of students kicking a soccer ball Wednesday.

Not that long ago, the 19-year-old Cabrillo College student was a player in the Breakaway College Access Project. Now, he’s a coach in the after-school program that hooks kids with soccer and provides tutoring and mentoring to encourage them to get a high school diploma and continue on with their education.

The program is celebrating five years of operations. As a Watsonville High freshman, Hernandez was part of Breakaway’s first class.

“In my family, no one had been to college so it was the last thing on my mind,” he said. “(Breakaway) opened my eyes, and gave me the thought that college is an option to pursue a better life.”

Breakaway is the brainchild of a trio of soccer enthusiasts: coach Hillel Rom, former Watsonville High teacher Sara Roe and Carol Schimke, who brought organizational development expertise to her role as executive director.

Schimke said the idea was to channel the Pajaro Valley’s passion for soccer into academic success.

The program, which serves about 200 students annually, started at Watsonville High and expanded to Pajaro Middle two years ago. The voluntary drop-in three-hour sessions are split between honing soccer skills on the field and sharpening academic prowess in the classroom.

Students earn points for attendance, which are converted into scholarship dollars when they enroll in college.

Every participant might not go right to college after high school, but the goal is to make sure they have the choice, Schimke said.

“We plant the seed that college is an option,” she said.

Breakaway also stresses the importance of the relationships students form with their adult mentors.

Program manager Eduardo Santana said students share their troubles with him and their joys. On New Year’s Day, for example, several texted him good wishes. To him, it was a small, but meaningful gesture.

“It showed me that I am making a positive difference in their lives,” Santana said.

Hernandez, who is majoring in sociology and plans to transfer to a four-year college in 2015, grew up in the same kind of neighborhoods as the participants. The stories he tells about his own youth — the pressure from gangs, the challenge to make good decisions — resonate with them, he said.

“I give them the thought, ‘He made it, and he’s the same as us,'” Hernandez said.